Rats are a destructive force contaminating more than 20% of the worlds food supply, damaging structures, landscaping, and transmitting parasites to humans and other animals. Rats are often found in and around homes and other structures, gardens, landscaped areas and open space.

In California, the two most common species of rats are the roof rat (Rattus Rattus) and the Norway rat (Rattus Norvegicus). A successful rodent control program requires proper identification of the rat species and a thorough understanding of their general biology and behavior.

Norway rats, also called sewer or brown rats can often be found burrowing by a shed, building foundation, or beneath rubbish piles. When they do invade buildings they usually remain under the house or on the ground floors. Rats eat a wide variety of foods but mostly prefer cereal grains, meats, fish, nuts, and limited fruits. The average female Norway rat has 6 litters per year and 20 offspring annually.

“When rats infest an attic, roof rats are usually the responsible party”

Roof rats, sometimes called tree, black, fruit or ship rats usually nest in trees (especially palms) and any dense landscape materials like ivy or bougainvillea. Roof rats have a pointed nose and their tail usually extends beyond their head if flipped backwards. When rats infest an attic, roof rats are usually the responsible party. Their food source consists of snails, insects, seeds, fruits, vegetables, nuts, pet food and so forth. They take a particular liking to citrus and avocados and will eat food while still on the tree. The female roof rat reaches sexual maturity at just 3 months of age and has a gestation period of 21 to 23 days. The average size of a litter is 5 to 8 pups. After giving birth, the female is capable of being in heat again within 24 to 48 hours. If you do the math, one female rat can be responsible for more than 1,000 offspring in an 18 month period!! 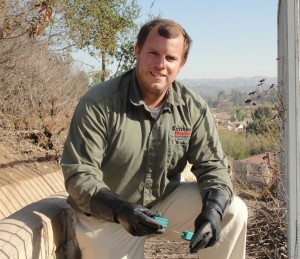 The majority of Critter Busters work is targeted at large scale problems, but homeowners are also frequent customers as well. Our experience includes parks, school districts, developers, homeowners associations, golf courses, cemeteries and landscapers. Call us today for a free estimate at 800-273-6059!

I fought gophers in my backyard for a month!  I even read the directions on the gadgets and boxes, but hole after hole appeared.  Critter Busters services our HOA and I called them up for help.  They came out, were great to deal with, and best of all got rid of the gophers completly on the First try!  They still followed up each week, and they saved my yard for a one-time fee [...]  (we get half-off since they service our HOA grounds).  The cost and ease of working with them was surprising, so it's the only service I will use going forward.  Honest, effective, and a great value! — Scott S. Stevenson Ranch, CA VIA Yelp