Murder Hornets in The United States 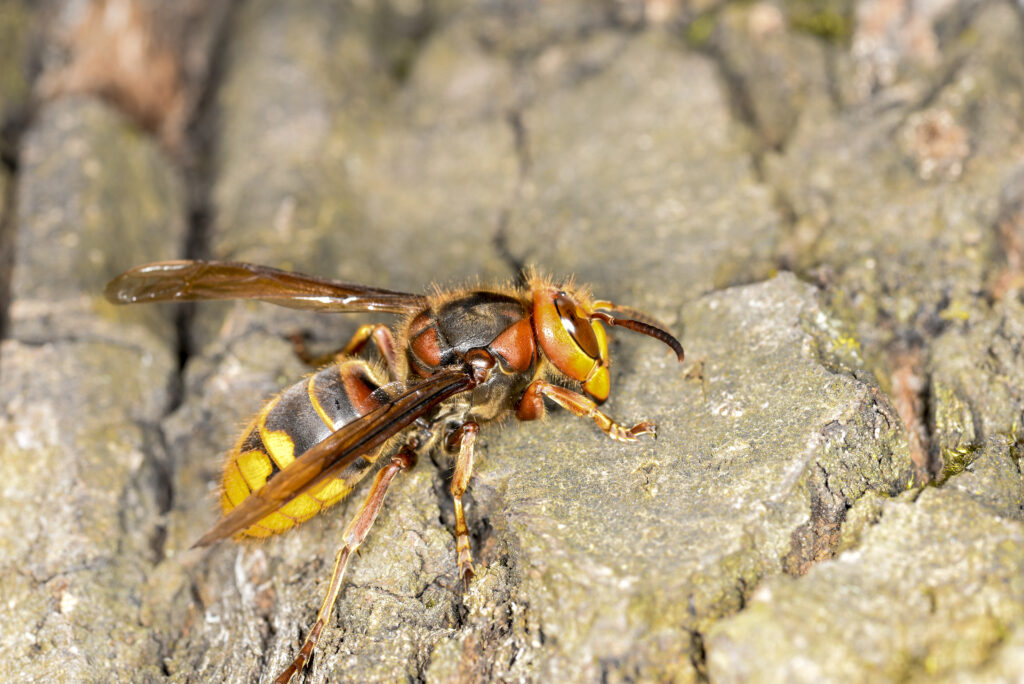 Sightings of the Asian giant hornet have prompted fears that the vicious insect could establish itself in the United States and devastate bee populations.

BLAINE, Wash. — In his decades of beekeeping, Ted McFall had never seen anything like it.

As he pulled his truck up to check on a group of hives near Custer, Wash., in November, he could spot from the window a mess of bee carcasses on the ground. As he looked closer, he saw a pile of dead members of the colony in front of a hive and more carnage inside — thousands and thousands of bees with their heads torn from their bodies and no sign of a culprit.

“I couldn’t wrap my head around what could have done that,” Mr. McFall said.

Only later did he come to suspect that the killer was what some researchers simply call the “murder hornet.”

With queens that can grow to two inches long, Asian giant hornets can use mandibles shaped like spiked shark fins to wipe out a honeybee hive in a matter of hours, decapitating the bees and flying away with the thoraxes to feed their young. For larger targets, the hornet’s potent venom and stinger — long enough to puncture a beekeeping suit — make for an excruciating combination that victims have likened to hot metal driving into their skin.

In Japan, the hornets kill up to 50 people a year. Now, for the first time, they have arrived in the United States.

Mr. McFall still is not certain that Asian giant hornets were responsible for the plunder of his hive. But two of the predatory insects were discovered last fall in the northwest corner of Washington State, a few miles north of his property — the first sightings in the United States.

Scientists have since embarked on a full-scale hunt for the hornets, worried that the invaders could decimate bee populations in the United States and establish such a deep presence that all hope for eradication could be lost.

“This is our window to keep it from establishing,” said Chris Looney, an entomologist at the Washington State Department of Agriculture. “If we can’t do it in the next couple of years, it probably can’t be done.”

On a cold morning in early December, two and a half miles to the north of Mr. McFall’s property, Jeff Kornelis stepped on his front porch with his terrier-mix dog. He looked down to a jarring sight: “It was the biggest hornet I’d ever seen.”

Beyond its size, the hornet has a distinctive look, with a cartoonishly fierce face featuring teardrop eyes like Spider-Man, orange and black stripes that extend down its body like a tiger, and broad, wispy wings like a small dragonfly.

Mr. Kornelis contacted the state, which came out to confirm that it was indeed an Asian giant hornet. Soon after, they learned that a local beekeeper in the area had also found one of the hornets.

Dr. Looney said it was immediately clear that the state faced a serious problem, but with only two insects in hand and winter coming on, it was nearly impossible to determine how much the hornet had already made itself at home.

Over the winter, state agriculture biologists and local beekeepers got to work, preparing for the coming season. Ruthie Danielsen, a beekeeper who has helped organize her peers to combat the hornet, unfurled a map across the hood of her vehicle, noting the places across Whatcom County where beekeepers have placed traps.

“Most people are scared to get stung by them,” Ms. Danielsen said. “We’re scared that they are going to totally destroy our hives.” 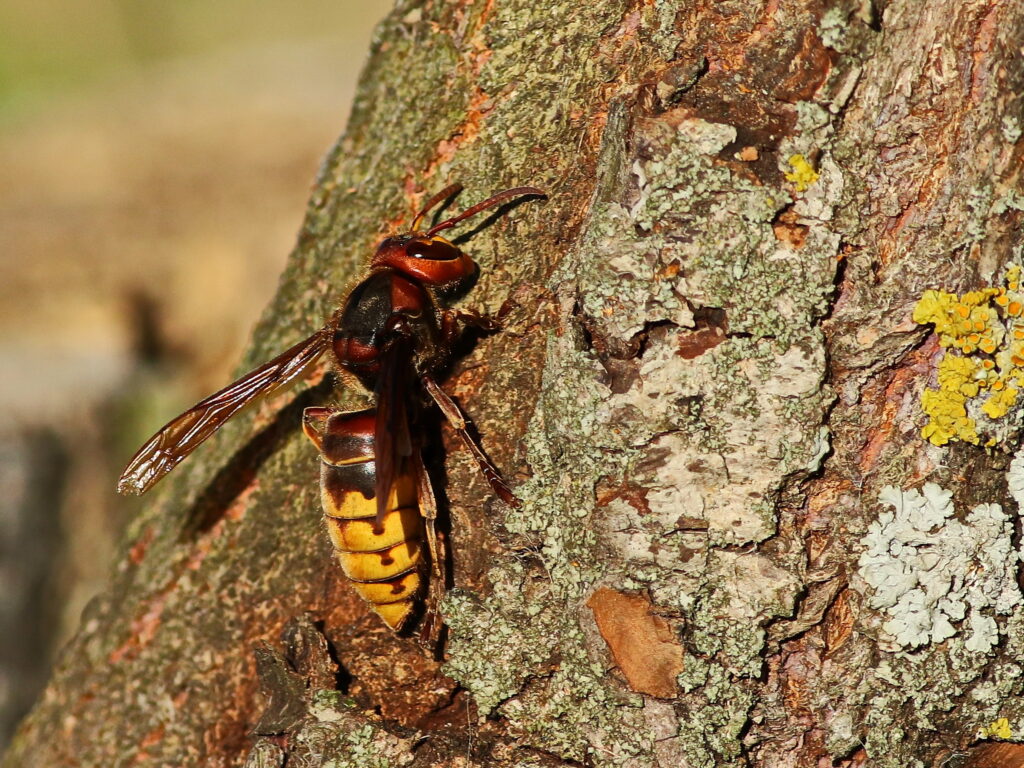 Adding to the uncertainty — and mystery — were some other discoveries of the Asian giant hornet across the border in Canada.

In November, a single hornet was seen in White Rock, British Columbia, perhaps 10 miles away from the discoveries in Washington State — likely too far for the hornets to be part of the same colony. Even earlier, there had been a hive discovered on Vancouver Island, across a strait that probably was too wide for a hornet to have crossed from the mainland.

Crews were able to track down the hive on Vancouver Island. Conrad Bérubé, a beekeeper and entomologist in the town of Nanaimo, was assigned to exterminate it.

He set out at night, when the hornets would be in their nest. He put on shorts and thick sweatpants, then his bee suit. He donned Kevlar braces on his ankles and wrists.

But as he approached the hive, he said, the rustling of the brush and the shine of his flashlight awakened the colony. Before he had a chance to douse the nest with carbon dioxide, he felt the first searing stabs in his leg — through the bee suit and underlying sweatpants.

“It was like having red-hot thumbtacks being driven into my flesh,” he said. He ended up getting stung at least seven times, some of the stings drawing blood.

Jun-ichi Takahashi, a researcher at Kyoto Sangyo University in Japan, said the species had earned the “murder hornet” nickname there because its aggressive group attacks can expose victims to doses of toxic venom equivalent to that of a venomous snake; a series of stings can be fatal.

The night he got stung, Mr. Bérubé still managed to eliminate the nest and collect samples, but the next day, his legs were aching, as if he had the flu. Of the thousands of times he has been stung in his lifetime of work, he said, the Asian giant hornet stings were the most painful.

After collecting the hornet in the Blaine area, state officials took off part of a leg and shipped it to an expert in Japan. A sample from the Nanaimo nest was sent as well.

A genetic examination, concluded over the past few weeks, determined that the nest in Nanaimo and the hornet near Blaine were not connected, said Telissa Wilson, a state pest biologist, meaning there had probably been at least two different introductions in the region.

Dr. Looney went out on a recent day in Blaine, carrying clear jugs that had been made into makeshift traps; typical wasp and bee traps available for purchase have holes too small for the Asian giant hornet. He filled some with orange juice mixed with rice wine, others had kefir mixed with water, and a third batch was filled with some experimental lures — all with the hope of catching a queen emerging to look for a place to build a nest.

He hung them from trees, geo-tagging each location with his phone.

In a region with extensive wooded habitats for hornets to establish homes, the task of finding and eliminating them is daunting. How to find dens that may be hidden underground? And where to look, given that one of the queens can fly many miles a day, at speeds of up to 20 miles per hour?

The miles of wooded landscapes and mild, wet climate of western Washington State makes for an ideal location for the hornets to spread.

In the coming months, Mr. Looney said, he and others plan to place hundreds more traps. State officials have mapped out the plan in a grid, starting in Blaine and moving outward.

The buzz of activity inside a nest of Asian giant hornets can keep the inside temperature up to 86 degrees, so the trackers are also exploring using thermal imaging to examine the forest floors. Later, they may also try other advanced tools that could track the signature hum the hornets make in flight.

If a hornet does get caught in a trap, Dr. Looney said, there are plans to possibly use radio-frequency identification tags to monitor where it goes — or simply attach a small streamer and then follow the hornet as it returns to its nest.

While most bees would be unable to fly with a disruptive marker attached, that is not the case with the Asian giant hornet. It is big enough to handle the extra load.

‘Outstanding’ is the only term to describe the professionalism, reliability, integrity, and effectiveness of Critter Busters. They perform their work in a highly efficient manner and at a very fair price. Our development was inundated with gophers before Critter Busters came to the rescue. Thanks to their vigilance, we now are virtually ‘gopher free.’ [...] We feel fortunate to have them as a service provider. — Niles K. President, The Reserve At Reino Community Association VIA Angie's List